The BioMat and Protection from harmful EMFs
(electro-magnetic fields) 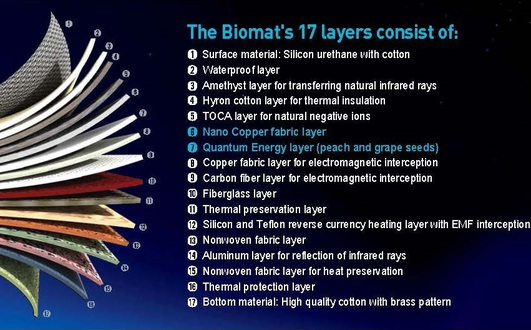 The BioMat and EMF's

One of the many functions of the BioMat is to


protect the user from harmful EMF's.


When laying on the BioMat, you are protected from
the harmful EMF's: whether they come though the electrical wiring of the house, outside power lines, TV's, cell phones, or even the wires coming up to the BioMat.

The BioMat blocks Harmful EMF's
while you lay on it.
This alone is rare to find in any product.

Some people lying on the BioMat express this as:

'I feel as if I'm surrounded by a bubble without anything affecting me, what's that?"

It's the EMF protection offered by the BioMat's  combined technologies.


The statements above have not been evaluated by the FDA.
An electromagnetic field (also EMF or EM field) is a physical field produced by moving electrically-charged objects.  It is one of the four fundamental forces of nature (the others are gravitation, the weak interaction, and the strong interaction).